If you would like to book an appointment or contact us for any other reason, please pop your details in below and we will get straight back to you.

Wigan Hearing are the No Wax Earwax Removal Specialists in Wigan, Darren Glancey has worked in audiology for many years both in the NHS and privately. He has also worked with leading hearing aid manufacturers offering technical support and professional services. He offers a wide range of audiology services including hearing aids and ear wax removal. He offers Microsuction ear wax removal at his hearing aid centre on Gathurst Road, Wigan.

He aims to show you exactly why he has an outstanding reputation in Wigan. He understands that earwax blockage is uncomfortable and irritating and he and his staff will always try to ensure that they see you as quick as humanly possible. You can call them directly for an appointment or, you can simply fill in your details on the form and they will be back to you immediately

Wigan Hearing will always try to offer a same day appointment when you contact them.

We offer instant micro-suction ear wax removal, Microsuction is probably one of the safest methods of ear cleaning, there are no liquids involved, therefore there is no mess and little fuss. It can usually be done the day we see you with no preparation, however, occasionally, it might need two sessions depending on the hardness of the ear wax.

We try to provide same-day appointments where possible but would usually be able to see someone within two days at most. 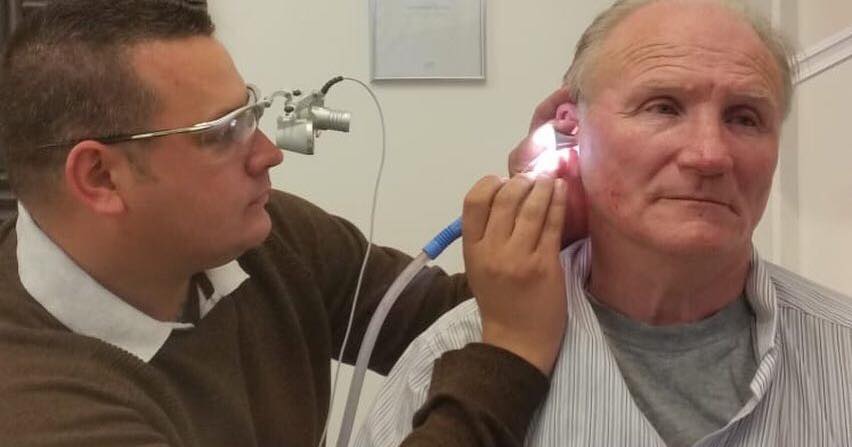 Ear wax is a natural mix of secretions and dead skin found in the ear. It is not a bad thing, it helps to protect the ear against dust, dirt and bacteria. Ear wax (Cerumen to be official!) is made up of skin cells, dust and oily secretions from the sebaceous and ceruminous glands in the ear canal. The secretions lubricate the ear canal and prevent it becoming too dry. Your ear wax is probably not the same as someone else's! Ear wax make up changes from person to person based on diet, age and race.

What can cause earwax buildup?

Some people just suffer from regularly blocked ears. It can be simply that the over produce ear wax naturally. Causes of earwax buildup can be

Symptoms of an ear wax build up

You are deaf, deaf I tell you!!!! Well, no actually, you might not be. But it is one symptom that can show up. Here are all the symptoms of hearing loss:

What can you do about ear wax build up?

If earwax isn't causing you problems, just leave it alone. The ear is self-cleaning and once the process is not interrupted the wax should just drop out. Sometimes though, probably because you have been fiddling with it, ear wax may build up in the canal. Normally once the build-up starts, it will just continue unless it is washed or sucked out. Eventually, the ear wax plug will grow to fill the ear canal.

This is when you start to have problems, usually, the first indication of it for you is when water gets into the ear during swimming or showering. This usually causes the ear wax to swell. This blocks the ear canal and you know about it immediately. If the wax build-up has got to the stage where it is causing deafness, problems with hearing aids, or is uncomfortable, it needs to be removed.

There are several types of ear drops that you can use to loosen and soften ear wax. the drops can include olive oil, almond oil, bicarbonate of soda and hydrogen peroxide. Here is the thing, they might not be suitable for you. If you have had a perforation of your eardrum in the past, ear drops aren't a good idea.

Rated 5 out of /5 based on over 25 customer reviews