Trying out a CROS hearing aid for my sudden hearing loss.

Read more about Carly on her blog: https://myhearinglossstory.wordpress.com

Contra Lateral Routing of Signal (CROS) is a hearing aid technology for people with unilateral hearing. The CROS system is for people who have relatively normal hearing in one ear and hearing that can’t be aided in the other. The receiving behind-the-ear device on the deaf side transmits the sound to a device on the good side. The user hears the amplified sound from the deaf side in their good ear. The person hears the sound from the good side naturally in their good ear, without any amplification.

I would be trialling the device for three months to see if it would be useful for me. If I decided that it wasn’t helpful, then I would be entitled to a full refund.  The CROS hearing aid technology is relatively new, and I’d read that some people really benefit from their CROS hearing aids. I even read someone’s account saying that, with the aid they were able to hear in background noise, and it was like they didn’t have a deaf side anymore.

I was very happy with the way my hearing aid looked. The aid components were a similar colour to my hair and if I chose to wear my hair down, they were almost invisible. However, I actually liked other people to see them. When traveling on the Metro for example, I would tuck my hair behind my ears so that they were visible. I liked that my disability could now be seen. Before I received my hearing aids, I had felt some frustration at the fact that people had no visible clue of any difficulties I might be having with communication. But with the hearing aid, if I failed to react to someone on my deaf side, or didn’t move out of the way for someone, I had a visible reason for my lack of response. This made me feel more relaxed on public transport, and in the city. I didn’t feel like I was constantly looking to my left to check if there was someone there, or if the lips of the person next to me were moving.

The main positive outcome of my CROS hearing aid was that it was really wonderful to have some sense of hearing again in my deaf ear. If someone was speaking to me on my deaf side, the aid would make a high-pitched distorted sound, similar to a ‘beep’, for each syllable spoken. These beeps would alert me to turn and focus my attention to my deaf side. Without the aid I would be clueless to the presence of anyone next to me on this side. It was comforting to know that if there was a sound on my deaf side, such as someone speaking, or a car approaching from the left whilst I was crossing a road, then I would be alerted.

I also had some frustrating experiences with my CROS hearing aid. The component in my deaf ear kept popping out. I would fit the mold correctly inside my ear, and within minutes, the aid would have squeezed its way out, so that it was no longer fitted snugly. This meant that throughout the day, I would keep having to push the mold back into my ear. Also, although I was happy that I would be made aware if someone was speaking on my deaf side, the hearing aid didn’t help me understand speech. The high pitched beeping that occurred in time with spoken syllables became an uncomfortable sensation. After my hearing loss, I had developed a sensitivity to noise, and the aids job was to amplify sound; this obviously did not help my sensitivity situation. I became frustrated because I couldn’t make sense of the beeps. I knew they represented words, but however hard I tried I couldn’t hear any difference in the tones to identify letter sounds or words. My good ear was also hindered. My brain seemed to be paying so much attention to the strange sensations and uncomfortable noises brought on by the introduction of my hearing aid, that it struggled to concentrate and understand speech. So in effect, the aid actually hindered my ability to follow conversation.

One of my hopes had been for the aid to help me hear better in background noise. This was not the case. The mix of music and chatter experienced in a restaurant was overwhelming for my CROS hearing aid. It would produce screeching sounds and amplify all the noise I didn’t want to focus on. Going out for a meal for a friend’s birthday with a group of people, was a confidence draining experience. I was only able to focus on one person talking, if I could get close enough to them with my good ear to hear them. This meant that I wasn’t involved in the dynamics of the group chatter. I felt isolated and I resorted to smiling and nodding at people to fake my following of any group discussion or jokes. This is a similar overview of my restaurant experiences with more than one person, when I am not wearing an aid. With the aid, the screeching noises also made it difficult for my good ear to focus on conversation.

The amplification of sound from my CROS hearing aid of everyday city noise such as motor cycle exhausts, building works and sirens, was at times very uncomfortable. Therefore a walk around the city would result in me opening up my aids or covering them to stop them working when confronted with one of these overly intense sounds. My life in a busy city didn’t seem to be a suitable place for my hearing aid. The city noises when amplified were just too uncomfortable, and weren’t helpful in aiding me to decode speech or make sense of the noises around me. The only place where the amplification of noise didn’t cause too much noise discomfort was at home…but home was the one place I felt like I didn’t really need to wear my hearing aid. At home I could generally hear OK when speaking with my boyfriend in the relatively quiet environment of our apartment.

There were also some strange experiences. One day, I had fitted the right component of the aid into my ear, when I started to hear what sounded like a radio. I had no idea where the noise was coming from. I thought that it was maybe something to do with the Bluetooth connectivity of the aid. Later I thought that it could have been noise being picked up from the television that was playing some distance away in the living room. Another time, I fitted the aids into my ears, and I realized that they felt much better; the sounds being produced seemed more natural and I wasn’t receiving the uncomfortable screeching noises. Then I realized the reason they were feeling more natural, was because the battery had died – The aids weren’t turned on! I was hearing normally in my good ear, but without the interference of the beeping from the device into my deaf ear!

I had willed my CROS hearing aid to work for me, but it hadn’t provided me the support I had hoped for. After three months of wearing it, I decided to return it. The audiologist told me that at present, there was no other option available that could possibly provide me with any help. I know however, there is an implant called a Bone Anchored Hearing Aid (BAHA) that could be of some help. This would obviously involve an operation, and I plan to do some research into availability and cost. But for the time being I will continue to live with my unilateral hearing; learning new strategies to help me communicate in everyday situations.

Here's a few pictures of the CROS. 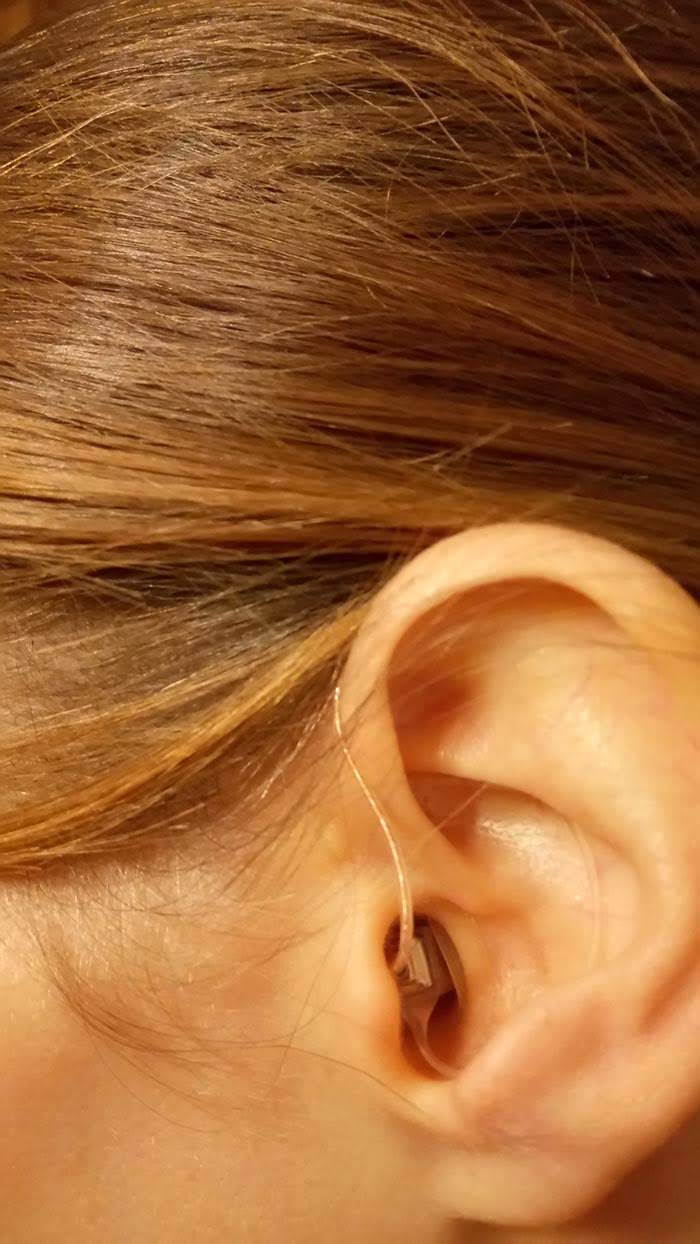 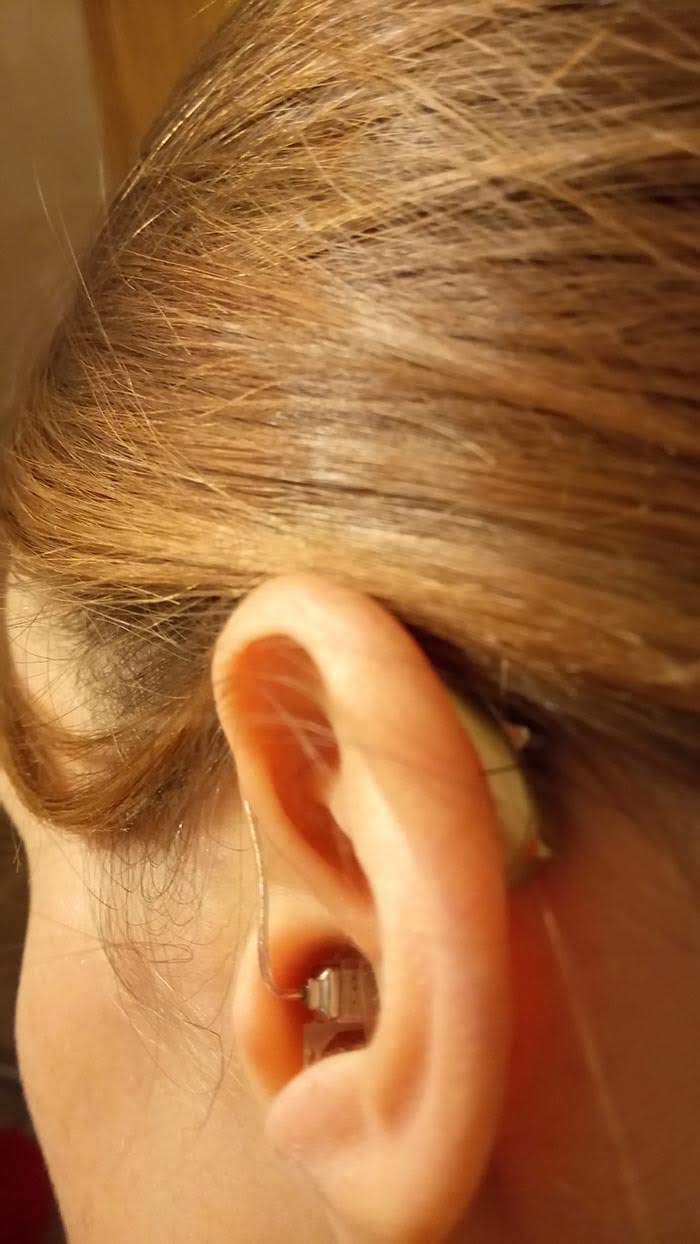 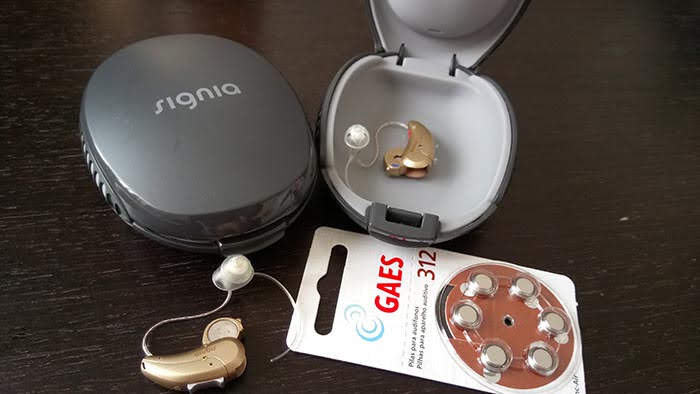