My daughter learnt to finger-spell (BSL) in about one hour 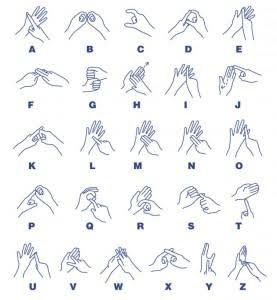 A few weeks ago my daughter asked me to teach her how to finger spell. It took me by surprise because she’d never shown any interest in learning to sign before. After about an hour of going through the alphabet she was signing words and short sentences pretty quickly.

Now, I’m as much of a proud dad as the next man and I’m sure my daughter is destined for greatness but she’s no child prodigy or anything like that. If she can pick up the finger alphabet in about an hour then presumably most other nine/ten year-olds can too. So why not teach them?

Obviously my daughter has a lot more exposure to hearing loss than many kids so she’s probably more inclined to want to learn more about hearing, signing, etc. What’s really nice is that during the rare times when I’m not wearing my hearing aids we now finger-spell short sentences to each other and it works really well.

So that got me thinking: could schools spend just one or two hours and teach nine/ten year-olds to finger-spell? Probably 90% or more of those who took the lesson would never use it again but it would be a nice introduction to an alternative form of communication, a little bit of exposure to deafness. Maybe kids could use it as their secret-code, a way to communicate without their parents knowing what they are saying – that would give it a bit of a cool factor. If nothing else, it would hopefully make signing seem less of a weird an unusual thing when they did come across it at some point in their lives.

If a class is doing a biology topic then it seems like a good way to spend an hour or two.

british-sign.co.uk is a great website for anyone wanting to learn BSL (including finger-spelling). It has an online BSL course and a nice little finger-spelling game where you have three minutes to correctly identify as many finger-spelled words as possible.