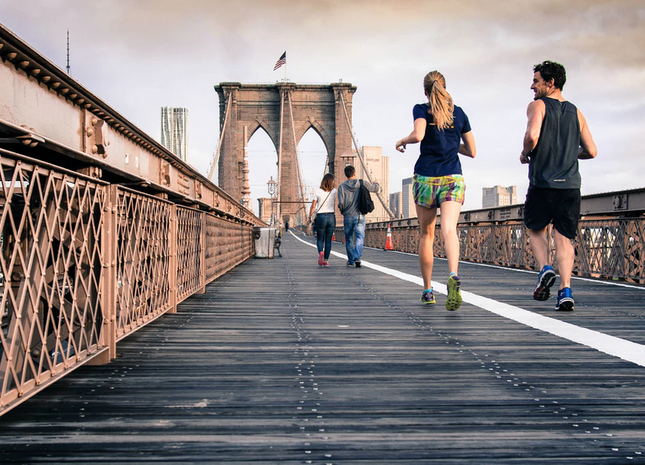 I met a guy this morning who gives lessons on living with hearing loss, at the same time as running at a pretty swift pace, and he doesn't even know he's doing it.

I was walking my dogs down a long, straight path/sidewalk. We'd been walking for a good fifteen minutes when a runner zipped past us from behind, I hadn't heard him approaching so didn't have time to reel the dogs in from their long leads. He came past me really close, almost brushing the shoulder close. What's worse, he passed one of our dogs real close, if she'd made a quick movement to the right he would have either kicked her or tripped on her lead.

My immediate thought was, "Is this guy taking the piss?". I thought he was probably making a point of going close because he thought I was taking up too much room with the dogs (I wasn't). So I let it go.

I carried on walking.

Five minutes later, I see two runners quite far in front, coming back down towards us, there's a super-fast guy and Mr Too-Close from before. Fast guy sees us, moves onto the side and we pass without a problem.

Too-Close approaches. I reel the dogs onto short leads and move to the right-hand side. Too-Close is heading straight for us, he's right on the side of the path we are. Well, I think "I'm not moving!", so we carry on walking, he carries on sprinting straight at us. I'm getting a bit riled up and ready to shout at the guy, he's probably 10 metres in front us now and still coming straight at us.

This guy has some serious attitude, there's plenty of space for him to go past. What an asshole.

I'm just about to open my mouth when I look him in the face.

Soon as I saw his eyes I knew he had some sort of sight issue. He obviously wasn't completely blind, maybe he was extremely short-sighted, maybe he could only see things in motion, I don't know.

He gets right in front of us, sees us, says a surprised, "OH!" and moves to the side. Boy did I feel bad.

Why am I writing this on a blog about hearing loss and hearing aids you might ask?

Well, there's a lesson there for anyone living with a hearing loss.

I had two interactions with this guy and there was a bit of a perceived problem (he was too close) and I got annoyed. I thought negatively of him, what the hell was his attitude problem? Did he think he owns the sidewalk? Bloody runners! If he touches my dog he'll be sorry. All things going through my head as he went past the first time.

It never occurred to me that he might be blind, not for one second (until I saw his eyes). I thought it was an attitude problem, not a disability.

Now think about your interactions with people when you don't hear. What will they be thinking when they said something and you blanked them? Or when you laughed when they just told you their dog died? I can almost guarantee you they won't be thinking, "oh, this person probably has a hearing loss". They will instead be thinking you are rude or similar.

I don't know anyone who has a severe problem with their sight so I rarely think about problems associated with that. Hence I never considered the runner may be blind.

If people don't have day-to-day exposure to hearing loss it's unlikely they'll be thinking about it.

My point is: hearing problems are your reality, your day-to-day, it's on your mind. When you pretend you can hear and you try to bluff it's unlikely the other person is thinking about your hearing loss.

Be aware that people are more likely to jump to other conclusions than the truth.

The other thing I took away from this situation was this: I noticed the guy was blind from looking at his face, yet I still have no idea what his blindness is like, I don't understand it, I don't know what he can and can't see.

This will be the same with other people and your hearing. Even if you say, "look, my hearing is really bad, can you speak up?", they still won't understand every nuance of what a hearing loss entails. That's not their reality so they won't get it and that's ok.

If the runner told me I should wave my hand at him and he'd see me, that would be fine, even he said, "look, could you just get out the way?" that would also be fine, but because I don't understand the extent of his blindness and what he experiences, I don't know how to deal with that.

Not all hearing losses are the same, it's too simple for people to assume they can just shout at you and everything will be fine. You need to let them know exactly how to help you to avoid them jumping to the wrong conclusion.