Problems Hearing in Noise? Try The Chatable App, It's Amazing

There has been some noise about the Chatable App for a while now and I have been following it with interest. The ChatableUniversal Hearing Aid App, to give it its full title, is a Smartphone-based app that promises to deliver a better understanding of speech in noise to anyone that wants it.  The word on the street as it were, is pretty good, so I thought it was time I found out a bit more about it. I talked to the team recently to do just that and I think the app is a revolutionary piece of kit that represents a whole new way to correct problems with speech in noise. I don't say that lightly, the app sits at the cutting edge of Neuroscience and Artificial Intelligence and offers a solution to the problem never before seen. Let's talk Chatable. 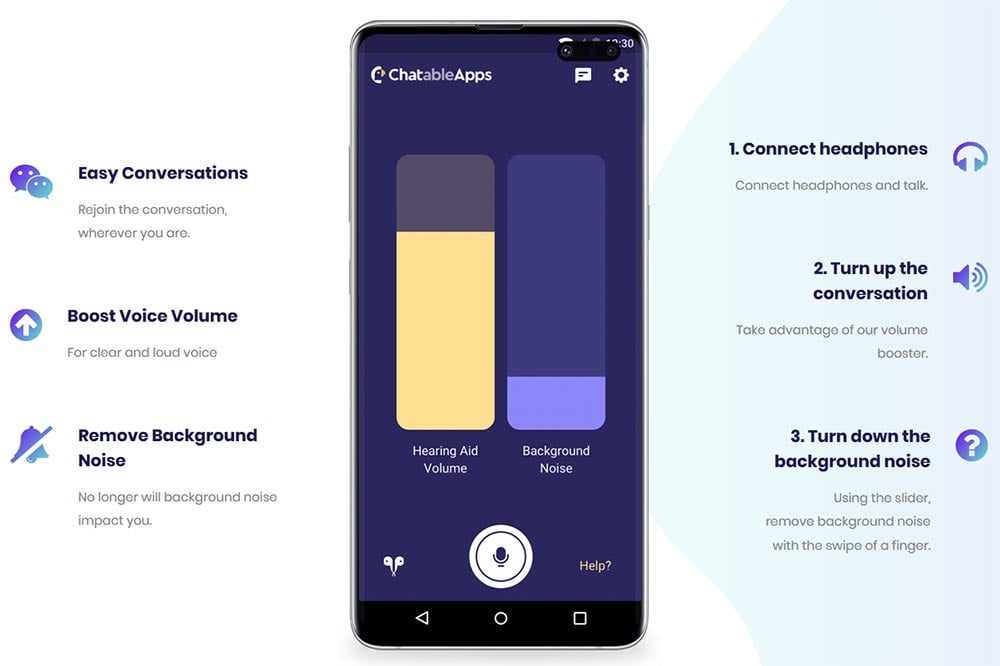 With or without hearing aids

Before I move onto some quick, pertinent facts, I want to point out that the Chatable App can be used with or without hearing aids. With Bluetooth hearing aids, the app can stream its audio to the devices. Alternatively, you can use a set of headphones to listen to the audio. Believe it or not, for many people who wear hearing aids, the outcome is just as good without their hearing aids on. More on that later.

It is a Smartphone app that can be downloaded from either the app store for Apple products or Google Play for Android phones. It will run on the phone in real-time allowing you to use it whenever and wherever you want.

What does it do?

The app provides you with a clear and loud speech signal without unwanted background noise, wherever you are. It enhances how you hear speech so that you can follow the conversations even in the noisiest situations.

Do I need a hearing test?

Astonishingly, no, the app will work without a hearing test or any set-up. It just works out of the box to deliver a better understanding of speech.

How does it work?

The Chatable app reduces your listening effort. It uses a proprietary artificial intelligence system called VOXimity. It makes the voice of the person talking to you clear and loud for focused, effortless hearing.

No audiogram, a new approach

When I spoke to the team, I was surprised to find out that the system doesn't use an audiogram or any type of customisation for an underlying hearing loss. After all, the whole basis of the correction of hearing loss is the understanding of the sounds that we can and cannot hear right? Many of us in the profession have said for years that the audiogram is a great start point. Still, it doesn't tell us anything about how we hear speech, which is the critical information we need to help.

The team at Chatable form the basis of their solution on that fact, they feel the audiogram is not what we should focus on. They argue that there are many people with seemingly normal hearing who still have problems processing speech in noise. They believe that to actually help people hear speech in noise, we need to focus on the neuroscience.

Understanding neurons beyond the ear along the nerve and in the auditory brain centre are what they have focused on. They merged that understanding with a cutting edge Artificial Intelligence system to manipulate sound to deliver what the brain actually needs.

The science is valid, and to be honest, the results are quite amazing. The control over speech and noise delivered by the app is nothing else but astonishing. As I said earlier, that's with or without hearing aids. I badgered Steve to use the app without his hearing aids, he said I won't hear anything, what's the point? Steve has a severe to profound hearing loss, and without hearing aids, much of the world doesn't exist for him.

I kept on at him eventually telling him to use the fricking thing with and without his hearing aids or I would come round his house! He relented, using the app to listen to the TV. He said, and I quote, "The noise reduction worked really well on the TV, I could hear the voices better with the app than I could with just aids. Was surprised tbh."

The fact that this app works for Steve with his hearing aids on is fantastic, it will be interesting to see how he does without. We don't often promote something on Hearing Aid Know, we often test and give honest feedback. I think we should make an exception for this app. At the moment it is free as they are in the Beta testing phase. It will be a subscription app in the future and the Chatable team are working that out now. To get your hands on the app to see what it can do for you, click the download buttons below.