I came across a fascinating article on Hearing Health and Technology Matters detailing a new Smartphone system for diagnosis of mid-ear infection. The prevalence of mid-ear problems in children is huge. Most children suffer from some sort of mid-ear problem whether they or their parents realise it. In many cases, it can be just an asymptomatic fluid build up. There may be some hearing impairment, but it passes without there being any accompanying pain or fever. However, for some children, mid-ear infections (Otitis Media) can be a large and recurrent problem. Tympanometry is one method used for the diagnosis of middle ear infection. A second method used to screen for the possibility of otitis media with effusion (OME, basically the middle ear is full of fluid without infection) and acute otitis media (really inflamed middle ear cavity caused by a bacterial or viral infection)  is acoustic reflectometry. Both methods are great tools, however, they both require a visit to an audiologist equipped with the equipment. This new proof of concept device may make that a thing of the past. In fact, during the study, the smartphone system outperformed a commercial acoustic reflectometry system in detecting middle ear fluid in 98 pediatric patient ears, and the system could be easily operated by patient parents without formal medical training. 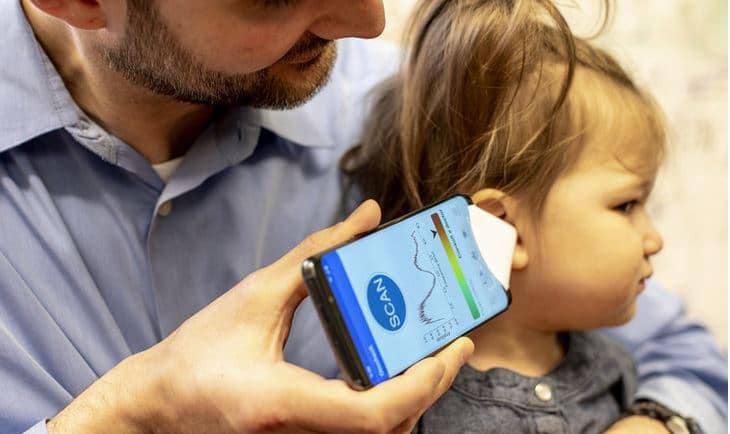 In the May 15 issue of Science Translational Medicine, Justin Chan and colleagues at the University of Washington in Seattle discussed the development of a smartphone system to detect middle ear fluid. The system uses both the microphone and speaker of a phone to emit a sound and then analyze its reflection (echo) from the eardrum. As I said, in the article, the authors report their smartphone system outperformed a commercial acoustic reflectometry system in detecting middle ear fluid in 98 pediatric patient ears. Additionally, the smartphone-enabled acoustic reflectometry system could be easily operated by patient parents without formal medical training.

The system uses a Smartphone app and a shaped cone of paper. The cone is held onto the bottom of the phone encompassing the microphone and the speaker while the app emits a sound through the speaker through the cone into the child's ear. The Microphone captures the reflection of the sound and the app analyses the sound reflection to diagnose the possibility of mid-ear fluid.

The picture below, taken from the article, shows how the portable acoustic reflectometry system works. 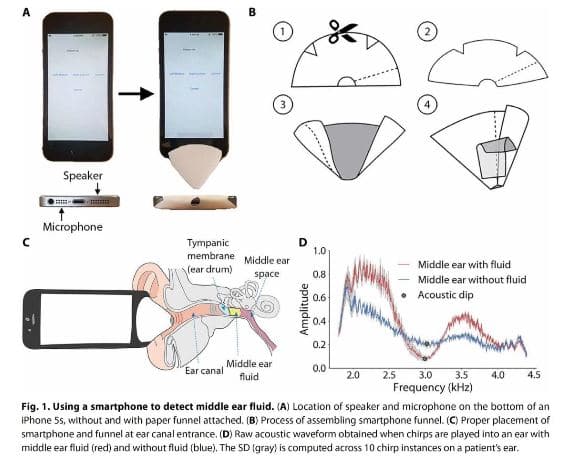 Unfortunately there are no real details on when and if the system will hit the market. However, I would imagine it will, it is a fantastic tool for parents of children who are prone to ear infections. More than that, it is afantastic tool for anyone who may be prone to middle ear fluid build-up.

It could save a lot of time spent in clinic waiting rooms. Like us on Facebook to keep up with our latest ramblings by clicking the button below.