I was terribly saddened recently to read of the death of Andrew Broadhurst. Andrew was a 39-year-old man from Birmingham in the United Kingdom that died from complications from Otitis Media (a mid-ear infection). The infection went undiagnosed and untreated, which led to meningitis and encephalitis which finally claimed his life. It leads me to wonder why such a thing would happen in the UK, a leader in healthcare. It is hard to believe that an ear infection could claim a life.

Put simply, despite attending his GP (General Practitioner) on four separate occasions, the mid-ear infection went undiagnosed for three months. Eventually, Andrew collapsed and was rushed to a hospital. He was diagnosed with Meningitis and encephalitis (swelling of the brain). Despite treatment, he quickly passed away.

How Did it Happen?

It is not for me to consider the misdiagnosis nor the failure of the GPs and I won't. However, I want to explain the mechanism of infection that led to Mister Broadhurst's death. Several people have spoken to me with shock, "how could an ear infection kill you?" is usually the question. Unfortunately, Otitis Media (mid-ear infection) can cause death if left untreated, as can other mid ear problems such as cholesteatoma.

The middle ear cavity sits behind your eardrum and contains the ossicles (the three tiny bones). It is a small cavity that is lined with skin similar in nature to your nose and throat. It also has a small drainage tube called the Eustachian tube which connects it to the back of your nose and throat. The attic of the cavity is separated from the brain by a thin bone. 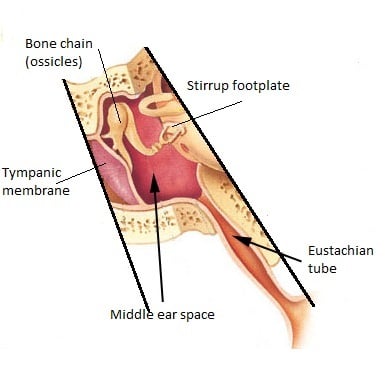 When I first began to work in this field I covered a lot of rural areas and I saw a lot of people who had been left with devastating mid ear problems. This was a factor of access to medical care when they were children and the lack of antibiotic treatment. Don't forget, antibiotics were really only introduced as a treatment in the forties.

In essence, many of these people suffered recurrent mid-ear infections which were left without proper treatment. It led to massive damage of their mid ear cavity and the mid-ear bones. Many had no eardrums left to speak of, some had no ossicles left and several had undergone Mastoidectomy (the removal of bone from around the middle ear cavity).

A mastoidectomy was undertaken to remove damaged and infected bone from around the middle ear cavity. It was not a procedure undertaken lightly, and it led to quite a large hearing loss and recurring problems, but it saved lives.

Thankfully, as the generations that I see every day have changed, I don't see many mid ear issues. Again, access to better medical care and antibiotics changed things. However, as we have seen in the case of Mister Broadhurst, that doesn't mean that mid-ear infections are any less dangerous, just better managed.

Unfortunately, in the case of Mister Broadhurst, his mid-ear infection became so serious that it infected the mastoid bone. It either eroded the attic of the mid-ear and entered the brain or the infection crossed the attic bone. Either way, the outcome was the same. Mister Broadhurst developed meningitis and because of it, he developed encephalitis which killed him.

Dr Declan Costello, a consultant at the hospital where Mister Broadhurst died, said: "Andrew had a middle ear infection that had moved backwards towards the bone behind the ear, the mastoid bone. Because of closeness to the brain, it is very easy to spread upwards and cause meningitis."

If you think that you may have an ear infection, there is a simple test that will confirm it. We undertake it regularly in the clinic where we see any evidence of a conductive (mid-ear) hearing loss. Using a Tympanometer we assess the function of the middle ear, it is a simple process and takes less than a minute. Most Independent hearing healthcare practices would use tympanometry. If you are worried about your hearing or your ear health, see a hearing care professional. If they find a problem such as Otitis Media, they will refer you back to your GP with a report.

Finally, I would like to give my condolences to the family of Andrew Broadhurst, I know they mean little in the face of such a devastating loss. But I hope that there may be some comfort from the fact that I and many others within my profession have been shocked and touched by his loss.

When I wrote this article I was concerned about balancing up the need for the important message to be communicated and the needs of Andrew's family. I did not want to exacerbate their pain in anyway. Andrew's Mother contacted me recently to thank me for telling his story. She said that Andrew donated his organs and even in death he was continuing to do what he loved during his life, helping other people. I would ask you to share this article to honour Andrew's memory and to ensure that other people understand the possible impact of mid ear infections.