Oticon has just announced the introduction of a new range of hearing aids in March 2019. The Opn S will be the replacement for the original Opn range and will be introduced in three levels of technology with four initial model types. The Opn has been hugely successful for Oticon and we still rate it as one of the best hearing aids around even though it has been around for years. Oticon has made some bold claims about the new Opn S and the benefits delivered over the original Opn platform. They boil down to 15% improved speech understanding, 10% reduced listening effort and finally, 10% increased memory recall. Let's talk about the Opn S. 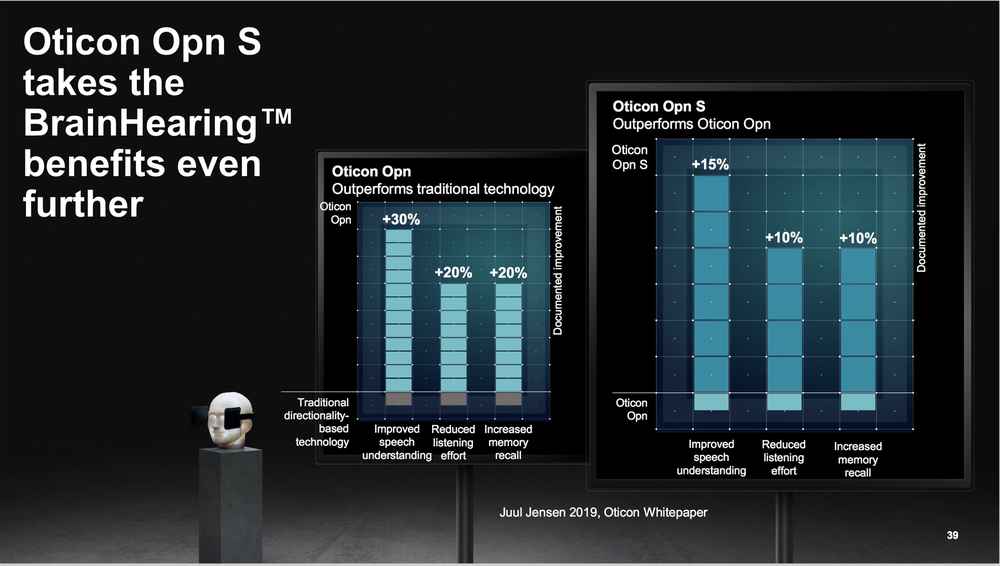 The details of the increased performance are based on Oticon research from Josefine Juul Jensen.  Josefine Juul Jensen works as a Clinical Research Audiologist at the Centre for Applied Audiology Research at Oticon Headquarters in Denmark. She also undertook the research that formed the basis for claims that Oticon's BrainHearing™ technology improves hearing-aid users' ability to understand speech in noise.

The announcement went on to say

"From the company that introduced the world’s first internet-connected hearing aid, comes a new hearing aid to enable people with hearing loss to experience speech understanding at a level on par with people with normal hearing*. The new Oticon Opn S™ helps people with hearing loss thrive in noisy venues, such as bars and restaurants. Oticon Opn S™ also says goodbye to feedback, i.e. the bothersome whistling that hearing aid wearers commonly experience, and features all of the lifestyle-enhancing connectivity features that Oticon is renowned for revolutionising."

The announcement said that in addition to better sound processing, the new hearing aids will feature dramatically improved feedback cancelling. Oticon hearing aids have in the past struggled with feedback, however, the Opn range did reduce the problems. It seems that Oticon believes the new system in the Opn S will eliminate the problem entirely.

Noting that even the simple act of hugging someone can cause annoying high-pitched feedback, Oticon Global Brand President Ole Asboe Jørgensen said that "without the risk of feedback, users can now feel confidently comfortable wearing their hearing aids.”

The company also mentioned a new OpenSound Booster in the Oticon On App. They said that "users will be able to use their iPhone or Android smartphones to boost hearing support in their hearing aids when they feel they need it." This is a little fascinating for me, the announcement did not go into details but I am intrigued as to what this may be. They said, "users can very simply select a boost of hearing support whenever they feel they need it." That has me a little fascinated, and I look forward to finding out a bit more.

The new range will initially come in four model types at three levels of technology and the market rollout of the Opn S family will start in March. The model types look like a Mini RITE, a Mini RITE-T, a Lithium-Ion rechargeable Mini RITE-T and a 13 BTE. As I said, this will be the first time Oticon goes with a lithium-ion power source. The details are scant and we would expect them to become clearer as we get close to launch time.

The end of year results also mentioned that both Bernafon and Sonic will be introducing new platforms sometime in quarter 2, 2019.

We assume the range will be Made For iPhone as the Opn was, however, details on connection to other devices is non-existent right now. I would expect the devices to be able to connect to existing Oticon remote mics and TV streamers, but not even that is for sure. As per usual, as the information comes out, we will let you know.