We will be live from the latest Oticon launch event in Bristol tomorrow morning, so if you are interested to see what they have up their sleeves, keep watching this page. We will update it as the day goes on.

The event is being held in the beautiful Clevedon hall outside Bristol and is pretty well attended with Dispensers from the UK and Ireland. 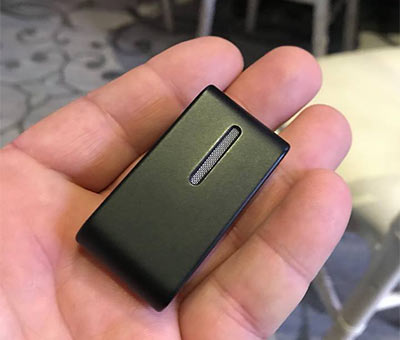 They have just introduced the Oticon Connect Clip, it will allow a Bluetooth connection to almost any device, not just any phone. The device can be connected to any laptop or computer to allow easy audio streaming to the Opn. There is also a small Bluetooth dongle that can be used for outstanding audio streaming. Although, the Connect Clip can be used with just the standard Bluetooth connection on the computer. It will also act as a remote microphone.

Rechargeable MiniRITE to be introduced to the UK

The rechargeable version of the Opn MiniRITE will now be available in the UK, the system uses the ZPower concept which means plenty of power for streaming and easy change of batteries if you forget to charge them. The rechargeable option is a real crowd pleaser, many users love the idea. The Z Power system is pretty solid and a lot of the hearing aid brands have adopted it because of it's versatility. The new battery door for the rechargeable option doesn't add much bulk to the device and when closed it basically looks like a 2 or 3 mm flate plate at the bottom of the door.

Alison from Oticon is introducing new data from ongoing studies with the Opn platform.

In essence, the studies showed that the ability of someone to cognitively focus on one speech signal over another becomes especially difficult with hearing loss. To do so means that a lot of cognitive effort and energy is used. The study used pupillometry which can measure cognitive effort to look at the difference with and without Opn.

The first study was to investigate the ability to hear speech in noise and to ascertain the effort needed. So they were measured on speech understanding and cognitive effort. Speech understanding figures with the Opn navigator jumped dramatically for noisy situations. One particularly interesting point was that in a -4 dB SNR (signal to Noise Ratio) situation, average restaurant maybe, was hugely improved. The words understood jumped from about 20% to 75%.

The cognitive function tests showed that cognitive effort was dramatically reduced across all sound situations. The one situation that is surprising is that there was even a reduction in cognitive effort in quiet situations. In essence, this study shows pretty good speech understanding and a lot less effort to get it. Which means that more cognitive effort can be used for something else like remembering stuff.

The second study concentrated on multiple speaker situations. The study assessed traditional directionality, narrow directionality and the Opn Sound Navigator. The test involved the subject speaking with three people facing them. Behind the subject was a noise source and arrayed around the group was speech babble sources. Opn Sound Navigator delivered the best in the study overall, but it depended on the position of the speaker.

If the person was to the front, both Opn and narrow directionality were similar in effect, the real difference was when the speakers were to either side. Opn delivered outstanding results for the understanding of those above the two other systems. A lot of the study data basically backed up both the experiences of Steve and myself. We both feel that we have a kind of different access to speech when we wear the Opn devices.

Apart from the Connect clip and the new study evidence, the rechargeables aren't exactly brand new. They were released in the US a couple of months ago but this will be the first time that they are available in the UK.