Since the explosion of lithium-ion rechargeable hearing aids on the scene in 2016, many have been patiently waiting for the technology to transfer to custom In The Ear hearing aids. Well, it appears the wait is over, Starkey has just announced the introduction of a lithium-ion powered Bluetooth, In The Ear hearing aid among other things at their big Expo 2020 event in Vegas. It makes me wonder are we witnessing the birth of the first true Hearable? This is what we know. 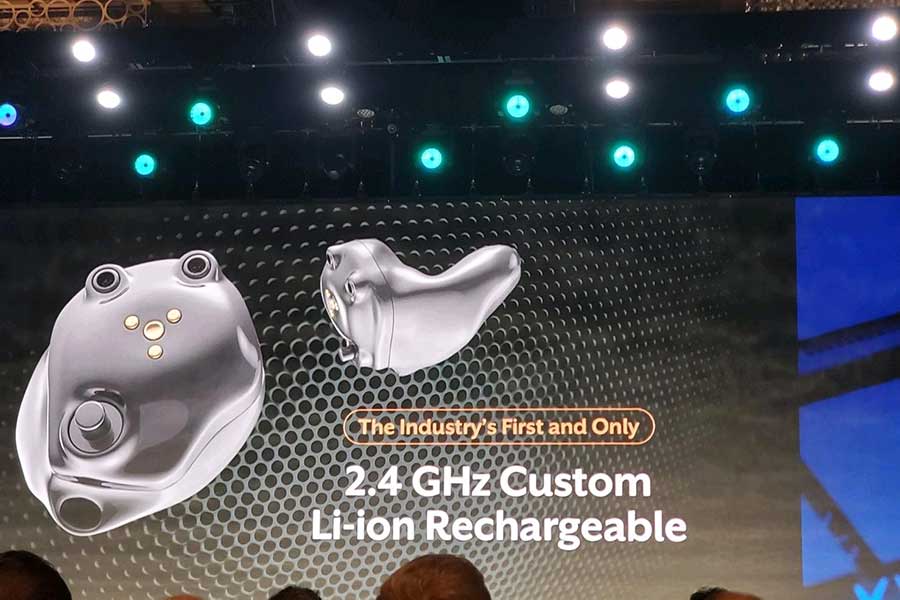 The new device will be available on their new Edge AI platform which will be introduced in February. Judging by the images, it is an ITC (In The Canal) or half-shell device. I think that is going to depend on the size of the ear canal and ear. It looks like a dual-mic custom device with a push button. The faceplate seems to be raised in the middle with what I would assume are charging contacts. While the image shows a black device, I would imagine it will be available in the more traditional colours as well.

Made For iPhone, Made For Android

The devices are Bluetooth enabled and will offer a direct connection to both iPhones and some Android 10 phones. That means direct audio streaming and call audio from those phones without any intermediary streamers.

Making a custom hearing aid rechargeable has been technically difficult, the main issue has really how are you going to charge it. Obviously, Starkey has solved the issue and this will be the first-ever lithium-ion powered custom hearing aid. They say the lithium-ion cell will give you 23 hours of battery life between charges.

The charging contacts make me wonder whether this is a contact charging or induction charging system. Hopefully, it is an induction charging system as that offers less grief for the user. If it is, it should be as simple as dropping the devices in the charger and forgetting about them. Starkey has been working with some innovative companies in the past to look at a near field charging system, I don't think that this is the fruits of that labour, but it would be really exciting if it was.

They discussed a new AI (artificial intelligence) powered Edge Mode during the presentation. They say the Edge Mode can be used when you are in very complex sound situations to give you crisp clear hearing. It appears the new mode will be activated by the user when they feel they need it. They said that crisp sound is delivered with a short burst of power when you need it most. It makes me wonder a little about the strategy.

They have said it is AI-powered adaptive tuning for the situation, the mention of a short burst of power makes me wonder about power use. It is really just nerdy interest, but I wonder do they commit a higher level of power output to power the feature. If they do, it will be interesting to see what it does to battery life.

Since the introduction of the Livio AI it has been obvious that Starkey sees the future of hearing aids in the wider health-focused concept. For want of a better description, let's call it a healthable device. The announcements of new apps including the Thrive Care App and the Balance Builder App just confirms and widens this strategy.

The Thrive Care App is designed to allow caregivers or loved ones to keep track of a loved one’s physical activity and social engagement. It makes a huge amount of sense, it will allow older hearing aid users to continue to live an active independent life while providing peace of mind for care providers.

Starkey has focused on falls before and their Livio AI device will send out fall alerts when the hearing aids detect the user has taken a fall. Hearing loss is firmly linked to the risk of more falls. The new Balance Builder app is designed to help improve balance, stability, strength and gait. The user is guided through balance exercises and workouts, based on head movements detected from sensors in the hearing aids.

Starkey has been blurring the lines between Hearables and Hearing Aids for a while now. The introduction of the lithium-ion powered Bluetooth ITE (In The Ear) device certainly does that. In fact, I think it is the first device from the hearing aid industry that can be firmly called a Hearable.

It will be interesting to see how it does in the wild. Like us on Facebook by clicking the button below to keep up with our latest utterances. Alternatively, if you don't like Facebook, sign up to the newsletter below. It is important to remember,  a hearing aid isn't properly fitted unless they do Real Ear Measurement.