In an article we undertook quite a while ago called "Nano Hearing Aids, An Outrageous Hearing Aids Rip Off Site, nanohearingaids.com", we explained why the devices from nanohearingaids.com were an outrageous rip-off and pointed out the blatant lies that they tell consumers. Anyway, we pointed out that those Nano CIC hearing aids looked just like cheap Alibaba amplifiers that could be bought for around thirty dollars. Dr Cliff Olson a highly respected Doctor of Audiology who provides hearing care and hearing aids in Phoenix, Arizona went one better. He got his hands on both the Nano CIC and the cheap Alibaba amplifier. He ran a load of diagnostics on the devices and surprise, surprise, they are almost identical. Let's talk about what he found out and the video he undertook. 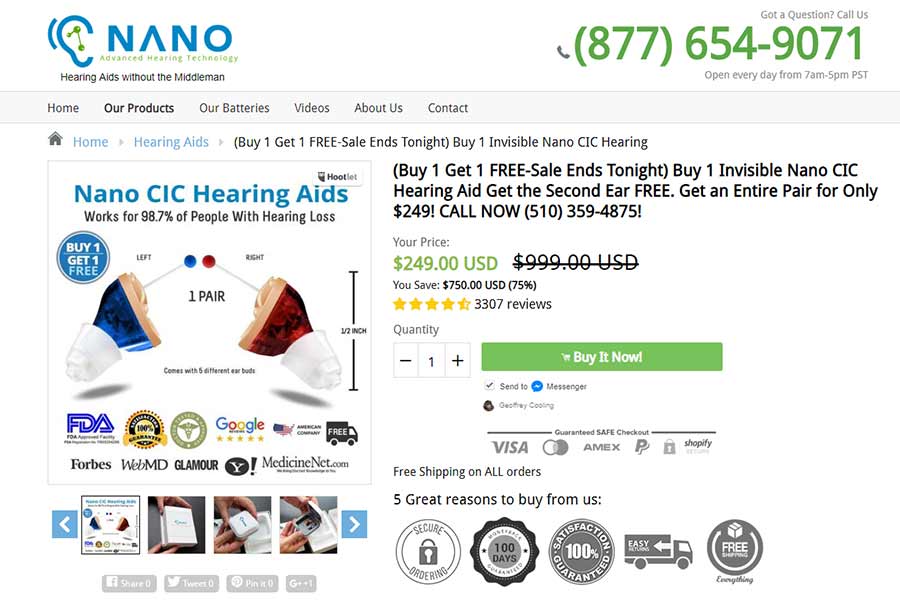 Who is Dr Cliff?

First of all, let me tell you who Cliff Olson is and why his opinion matters and can be trusted implicitly. Cliff has dedicated himself to producing high-quality educational videos which allow consumers to be informed about hearing aids and hearing care. His Youtube channel is by now famous and he has over 27,000 subscribers. His videos get thousands of views. Cliff knows what he is doing and he prides himself on giving clear unbiased info.

What Did He Do?

So Cliff ordered the two separate devices from Nano and Alibaba. When they turned up, he did a physical comparison between the devices. In essence, apart from the branding, the two devices were exactly the same. More than that though, they were both packaged with an accessory pack that was exactly the same right down to the little screwdriver to turn the volume control. But hey, that could simply be a coincidence, you know, these things happen. Sometimes if it walks like a duck, looks like a duck and quacks like a duck, it's a swan in disguise right? Well, no, actually, it's usually a duck.

Cliff undertook electroacoustic testing of the device using an industry standard testing device (hearing industry). What he found out was fascinating. The Otometrics hearing instrument test box allows us to measure the Diagnostics of hearing aids with an extremely high level of accuracy by doing a diagnostic test.  With the equipment, Cliff could directly compare the output of the Nano hearing aids with the Alibaba amplifiers in a very controlled environment that eliminates variability of measurement.

He ran the Nano hearing aid through the diagnostic testing sequence first and he found that he couldn't complete the full usual set of tests because the volume control on the Nano hearing aid was only set for two levels of volume, minimum and maximum, there was no in-between. It seems that even though the Nano devices have volume wheels they only have two volume settings maximum volume and minimum volume no matter how much he adjusted the volume wheel.

Performance in The Ear

Cliff, not being one for half measures then used a real ear testing device to see how both the Nano devices and the Alibaba devices actually worked in the ear. Yes, you guessed it, exactly the same, identical performance from both. However, we learned a rather worrying thing from this test. Cliff set the targets for a normal sloping to moderate sensorineural hearing loss which is a very easy type of hearing loss prescription to match. He found that the outputs from both devices set to low volume just didn't match the targets needed. Even worse, the ouputs on the maximum volume could in fact further damage someone's hearing.

Cliff Olson finished off his video by saying that he couldn't advise anyone to even try either of the devices. He, like us is an unbiased source of information who is simply concerned that consumers get good solid easy to understand information. While it is difficult to say that these devices are the same device without deeper investigation, the simple fact is this:

You know, if it walks like a duck etc etc. You can see Cliff's video below. Like us on Facebook by clicking the button below that if you want to keep up with our latest burblings.