What Do Consumers Want From Hearing Aids?

Hearing Tracker recently released an update of what people want from their hearing aids. 6,340 hearing aid consumers scored the needs, so that's a pretty big cohort. I thought it worthwhile to go over it. There is an image of the data below; you can click on it to bring you to a much bigger picture that is easier to read. Let's talk about hearing aid user needs and the features that meet them. 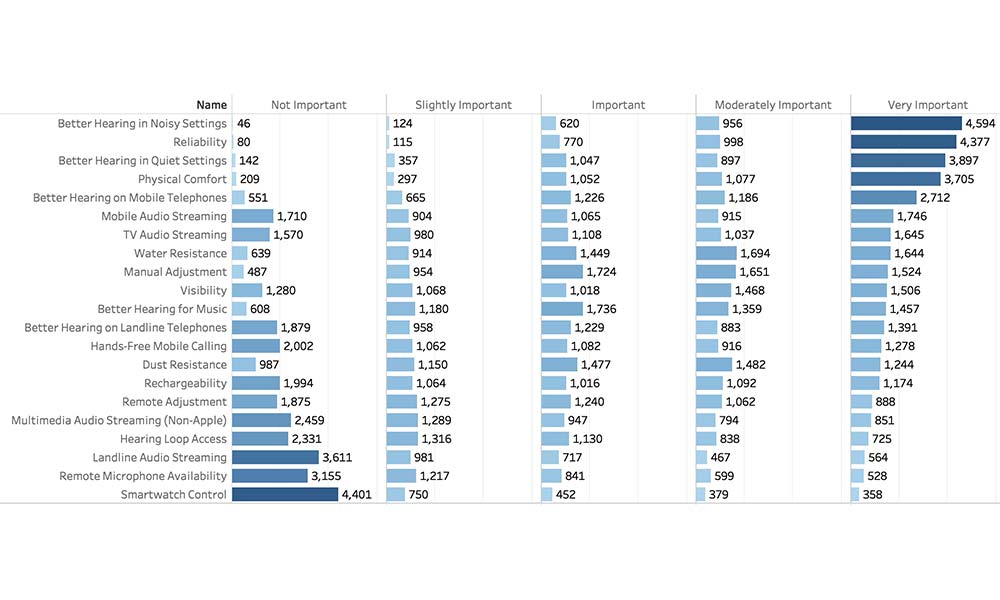 Top of the list is the ability to hear better in noise; I don't think that is a surprise to anyone as it is the one thing that everyone with hearing loss says. Just 6,300 people thought hearing in noise was necessary with the bulk saying it was imperative. If you want to hear better in noisy situations, you need to be realistic about the hearing aids you buy. You need upper mid-level or premium hearing aid technology. You might also need a remote mic. If those technology levels are out of your budget, then you need a remote microphone with lower level technology. Which leads me onto remote mics

Rechargeability was important for almost seven out of every ten, while reliability, water resistance and the ability for manual control were important for nearly everyone.

The ability to hear better in quiet situations was also hugely important to most of the cohort. That surprised me a little because most people say they understand fine in quiet in a one to one conversation. Generally, they don't, but they don't realise it. Which says that the cohort is enlightened and probably experienced.

Reading through the needs, it strikes me that there is not one single hearing aid available that meets them all. Yes, plenty of devices will meet the requirements with some compromises. For instance, you can have hands-free calls with many direct connection devices, but you will have to wear a phone clip of some sort. You can, of course, have hands-free calls with the new Phonak Marvel, but you can't have a remote mic.

You can have direct multimedia streaming from non-apple phones only with the Marvel; soon, the Quattro will deliver direct streaming from Android. Like I said, compromises. The best thing is to work out what is important to you and how best to achieve it. Don't necessarily focus on one feature, try to understand the options more holistically.