Best and Worst Private Hearing Aid Retailers 2018 by Which?

Which? has undertaken another series of surveys about hearing aids and their providers. In this the second article covering their findings, I want to speak about their Best Hearing Aid Providers 2018 article. Which? surveyed thousands of hearing aid users about their experiences asking questions that covered places that offer the best hearing tests and product choice, to those that deliver the best value for money. I will let you in on a secret, Independents won out, but you can see which other hearing aid providers scored best in the table below. 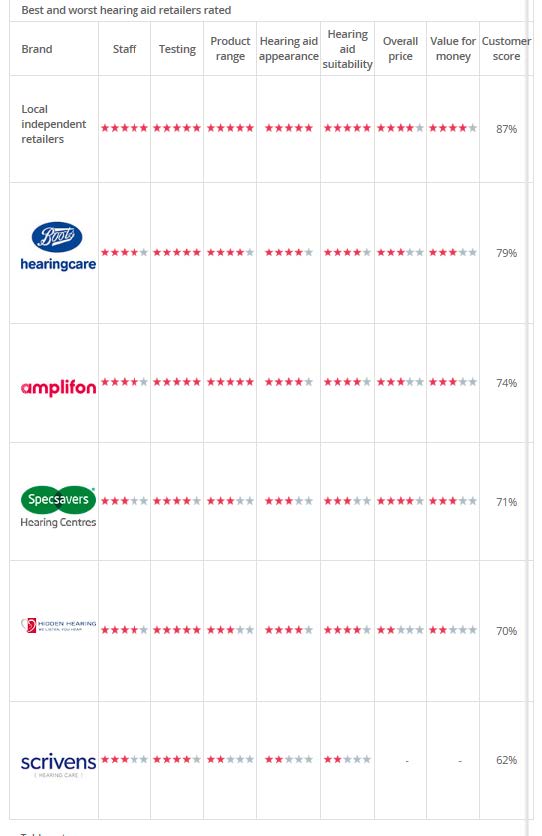 Why does it matter where you buy hearing aids from?

A hearing aid is a major investment, not just in monetary terms. That investment of time and money should result in a better life for you. It's important that you choose a trusted, knowledgeable retailer to ensure you increase your chances of getting the best hearing aid for you. While Which? Feel that all hearing aids are pretty much the same, I wouldn’t ascribe to that view. That is probably an argument for another day. Having said that, I do agree with them when they say, “It's the professional fit and service given by the provider that matters more”.

The survey results show that local independent hearing aid providers are rated most highly by customers. They reached an overall customer score of 87%. At the other end of the table was Scrivens, with 62%. Which? Reported that Independents excelled in pricing transparency and value for money. The survey respondents also gave independents the highest ratings in the categories covering professional and knowledgeable staff and the way they deal with questions and concerns.

Out of the national high street brands, Boots Hearing Care came top with an overall customer score of 79%. It received three-star or higher ratings for each of the 21 aspects of service that Which? quizzed its customers about. Boots got full five-star ratings for the quality of its hearing testing, follow-up care, privacy and clarity. Interestingly Scrivens fell down on its product offering - including a poor rating for the comfort of its hearing aids and how well they suit the individual.

Interestingly, nearly a quarter (23%) of private hearing aid customers felt under some pressure to buy, and just over one in five (21%) felt that they were under pressure to select a more expensive option from a range of suggested products. This varied considerably between providers, with the biggest difference between Hidden Hearing and local independents.

How did hearing aid retailers differ?

It’s fascinating when you dig a little deeper into the survey, one thing that was interesting was that what you pay for hearing aids isn't necessarily rated the same as value for money or transparency of price. For instance, Specsavers was rated good for price and price transparency but it was only rated average for value for money. So the survey seems to suggest that they are cheap and transparent but don’t deliver value for money no matter what they charge.

That’s a really interesting concept and I wish I could have delved deeper to identify why. I mean is it the service and aftercare, is it the efficacy of the aids? Why is cheap, not good value for money, did they feel that they would have to spend again to get better? I wish that Which? had asked questions about loyalty to the brands. If they did, they didn't discuss them.

Customers rated independent hearing aid retailers excellent for transparency of price, and good on overall price and value. Hidden Hearing got spanked in those categories, customers rated the brand poor for price and value for money. It was rated average for price transparency, which is lower than the other brands rated (Hidden is the only high street brand that doesn't put its hearing aid prices online).

In finishing, independent hearing aid providers are again rated top as providers. Other key lessons are that when it comes to hearing aid success and satisfaction, you get what you pay for and surprisingly, independents appear to be a little cheaper than Boots.