In the last couple of articles, I have covered my experience with the Signia Pure 312 7 Nx. I wanted to tie it all together here and give a full rundown of the models available, their features and also give you an idea about the different technology levels that will be available.

These hearing devices are based on a brand new chipset from these guys, they have also introduced a processor that will deal solely with the processing of the user's voice. On top of that, the Nx platform also has a direct connection to iPhones, which means the range is Made For iPhone with all of its connotations. Let's talk about the Nx platform.

Signia made a big deal of the OVP or Own Voice Processing at the launch, and these devices are the first hearing aids to process the user's own voice differently from everything else. In fact, they have dedicated a completely separate processor on the platform to facilitate that. They said that the strategy will increase the acceptance of a user's own voice dramatically.

I have to agree wholeheartedly with that sentiment, the OVP feature is amazing. My experience with it has been pretty jaw-dropping. In the article Signia Pure 312 7 Nx Hearing Aids, Here is What You Need to Know, I talked in more depth about the own voice processing feature and why it might be of interest to you. The pertinent statement here though is:

When I was fitted with the Nx I was fitted with closed domes, I thought this isn't going to work as I heard my voice explode in my head. Then, we went through the own voice training protocol (count from twenty-one until it is happy it knows your voice). The feature was turned on, and no more occlusion, just like that. I was a bit speechless (that doesn't happen very often). By no more occlusion I mean no more auditory occlusion, I wasn't caused any difficulty by my own voice.

For new users of hearing aids the sound quality of their own voice can be off-putting, but it is usually something that they get used to. However, as Signia point out, used to does not mean happy with. This system promises to deal with the issue and it does it very well.

As I said, Signia has expanded their Bluetooth system across the Nx platform, offering direct connection with the models they have introduced. Their original offering, the Pure 13 BT was well received, the system was innovative in that it used the sensors on the iPhone to assess the forward movement of a user. This allowed the hearing aids to change how they were processing sound. This system and feature set has now been expanded across the new range.

Signia feels that knowing the user is moving and adjusting the feature set to reflect it should be an integral part of what hearing aids do, I think it makes sense, I also think it is part of a larger movement within hearing aids, whereby they take data from surrounding data sources to make them better. They say that this feature and others are an integral part of the system they call the 3D Classifier.

The 3D Classifier analyses many factors of the user's environment and communication behaviour. It uses information on the user's voice activity, their motion and sound data to tailor the hearing aids response to better suit the user's needs.

Like the Oticon Opn and the Widex Beyond, the Signia Nx platform has two wireless radios, the Bluetooth radio and the proprietary Signia wireless system. This approach brings real benefits, it ensures that the outstanding ear to ear features can still run even if you are streaming audio or taking a phone call.

This is a really interesting development, Signia has made the Telecare service a live service. They were initially the first to offer Telecare with a limited fine-tuning option although Resound quickly followed with the launch of the LiNX 3D and their Remote Assist which had more functionality. Signia though quickly expanded that fine-tuning option and added video calling to the system. Now they have enabled full live remote tuning with video support which is a pretty huge breakthrough.

There are three models initially available and they will be across three levels of technology. The aids I tested are the premium 7, the mid-range 5 and the entry level 3. The models themselves are two Receiver In Canal devices with different battery sizes and a BTE. The model I used is a Pure 312 device. Let's talk about the devices.

This device is an updated version of their Pure 13 BT, it offers the new system which separately processes the wearer’s own voice. It comes with superior connectivity with direct streaming and the myControl App. The hearing aid has a rocker switch which allows programme changes and volume changes. It is IP68 rated which means it is for all intent and purposes waterproof and can be fitted with the four levels of receiver power making it suitable for most hearing losses. Signia say that users will enjoy the longest wearing time in its class while streaming. It also has access to the full live remote support via TeleCare 3.0. It is compatible with the myControl app and it will connect to the StreamLine TV transmitter and the new StreamLine Mic when it is released. This model will be available at the 7, 5 and 3 levels of technology. 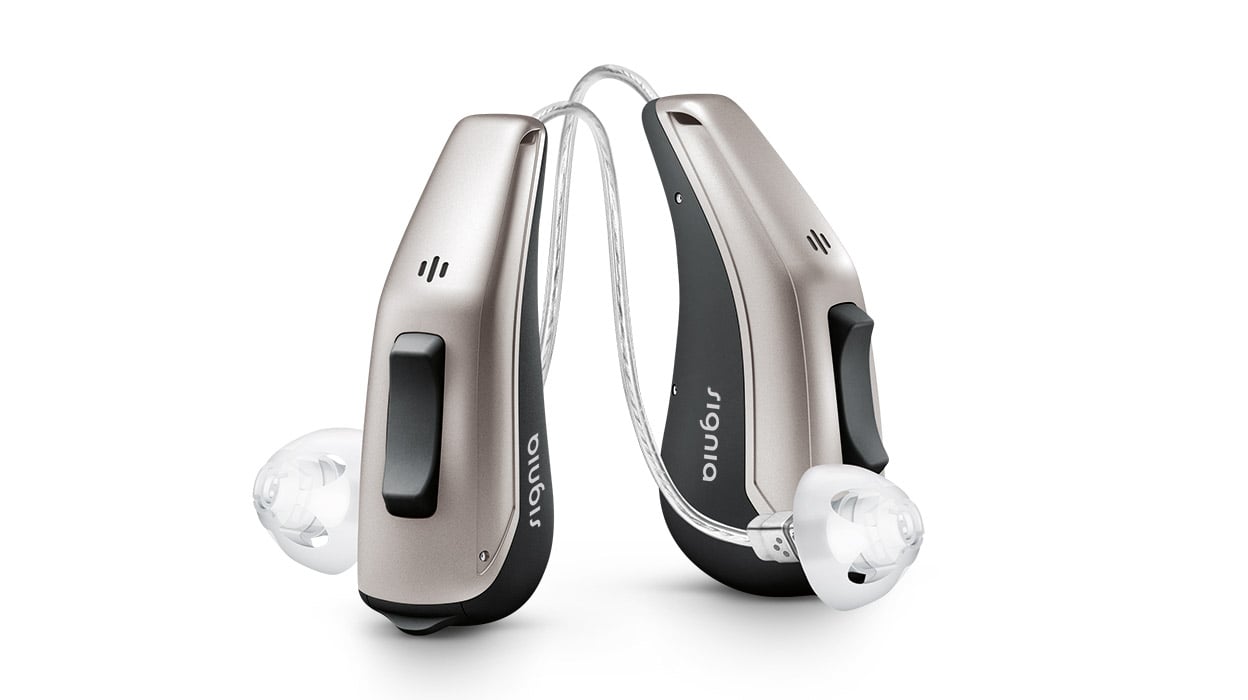 This device is a very svelte Pure (RIC) device using a 312 battery, again it offers the new system which separately processes the wearer’s own voice. This is the device I have been wearing, I really like it, it is neat, easy to wear, sits on the ear well and looks good. The hearing aid has a rocker switch which allows programme changes and volume changes. It is IP68 rated which means for all intent and purposes it is waterproof. It can also be fitted with the four levels of receiver power making it suitable for most hearing losses. It comes with superior connectivity with direct streaming and the myControl App. It also has access to the full live remote support via TeleCare 3.0. It too connects to the StreamLine TV transmitter and the new StreamLine Mic. This model will be available at the 7, 5 and 3 levels of technology. 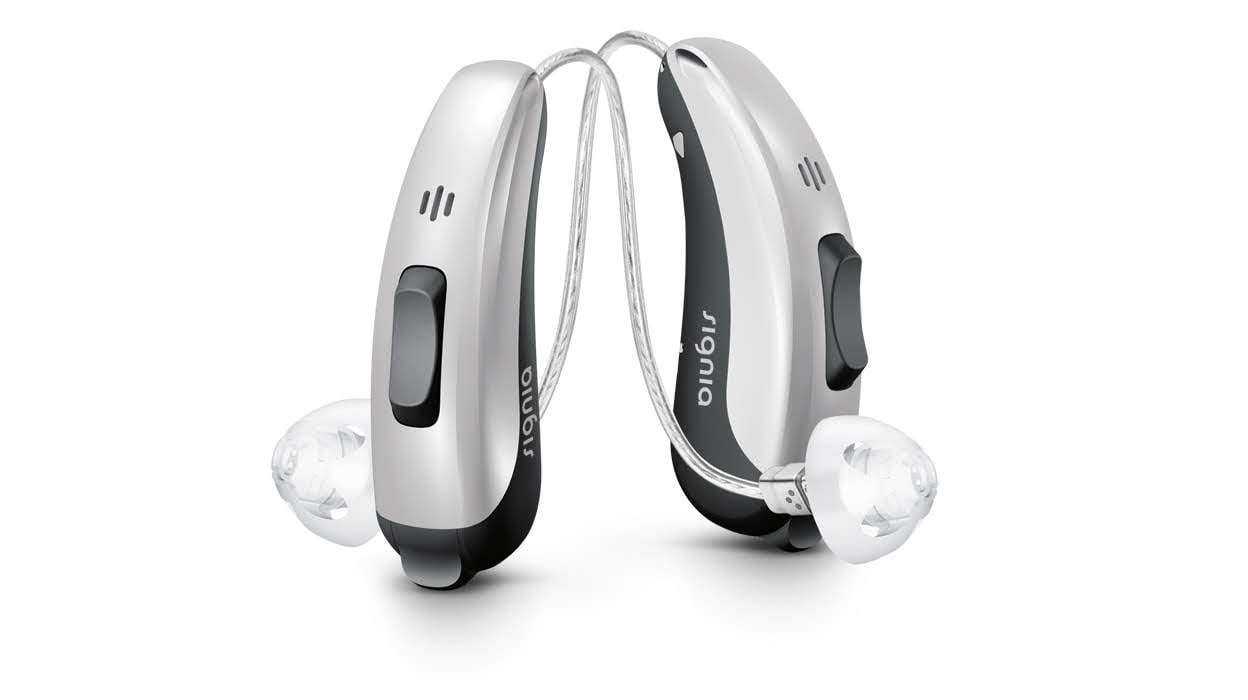 This device is a BTE device using a size 13 hearing aid battery, again it offers the new system which separately processes the wearer’s own voice. It also comes with superior connectivity with direct streaming and the myControl App. It also has access to the full live remote support via TeleCare 3.0. The device also offers the rocker switch for programme and volume control changes. This is a pretty versatile device which offers a telecoil option with the simple switching of the battery door. I think that is pretty cool, I like telecoils, I think they are outstanding for people with hearing loss who need help in large areas like auditoriums, churches and theatres. This device is IP67 rated for dust and moisture. This model will be available at the 7, 5 and 3 levels of technology. 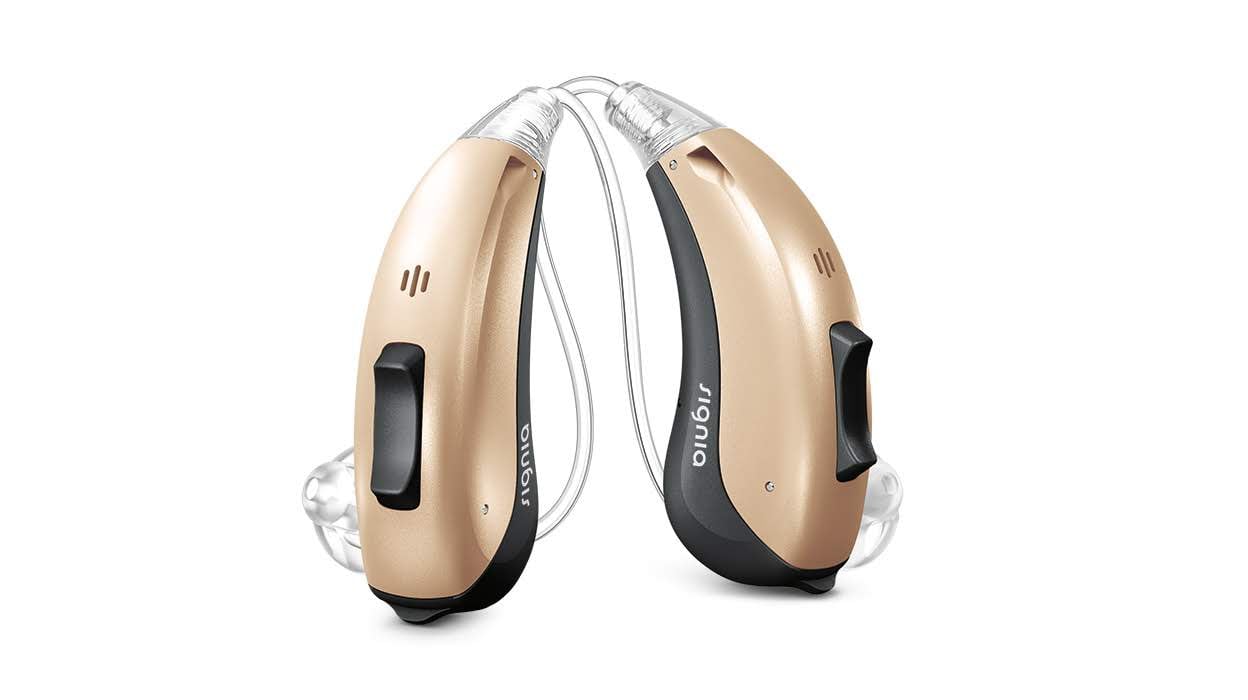 My experience with the Pure 312 7 Nx has been pretty good, I have been happy with their performance on an everyday basis and I have been impressed with the Own Voice Processing feature and the streaming. You can read my full rundown on the Signia 7 Nx performance here. I think these are pretty exciting new hearing aids. Obviously, I would expect the premium range devices to deliver outstanding performance, however, it is clear that Signia has retained a great deal of benefit as you move down the technology levels.